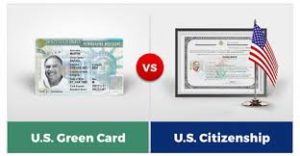 The terms “permanent resident” and “U.S. citizen” are often confused with one another.  Although both confer rights to live legally in the United States, they mean very different things, as described below.

A lawful permanent resident is someone who has been granted the right to live in the United States indefinitely. Permanent residents are given what’s known as a “green card,” which is a photo ID card that proves their status. (But it is no longer a green.)

Permanent residence includes the right to work here and to petition for close family members (your spouse and unmarried children) to receive permanent residence and join you. However, your family members will be considered “preference relatives,” meaning that only a limited number of immigrant visas are available to people in this category per year, and so they are likely to spend five or more years on a waiting list before being allowed to enter or remain in the United States or get a green card.

There are important limitations on lawful permanent residents’ rights, however. You do not have any rights to vote in U.S. elections. If you leave the United States with the intention of making your home elsewhere, you will be considered to have abandoned your residence and given up your green card.

Contrary to popular myth, you can abandon your residence in as little as one day. However, it’s true that immigration authorities will take a closer look if you spend more than six months outside the United States. And if you spend more than a year outside the United States, the authorities will presume that you have abandoned your residence, and you will have an uphill battle convincing them otherwise. If you plan to leave the U.S. for a period exceeding 12 months, it’s a good idea to obtain a reentry permit first.

Upon your return from travel, you are subject to the same grounds of inadmissibility as you faced when you first got the green card. So, for instance, if you have been receiving government assistance or welfare, you could be excluded at the border as a public charge.

Another important limitation on lawful permanent residents is that they are subject to the grounds of deportability. If you commit certain crimes or security violations, or even fail to advise USCIS of your changes of address, you can be placed in removal proceedings anddeported from the United States.

After a certain length of time – five years in most cases – permanent residents who have shown good moral character and can speak, read, and write English and pass an exam on U.S. history and government can apply for U.S. citizenship (to naturalize).

People can become U.S. citizens by birth in the United States, through U.S. citizen parents (depending on the laws in effect at the time of their birth), or through the process known as naturalization.

A U.S. citizen is eligible to receive a U.S. passport, which is issued by the U.S. State department. Many countries allow visa-free travel for U.S. citizens.

A U.S. citizen can leave and reenter the U.S. at any time without being subject to the grounds of inadmissibility or requiring a reentry permit. There are no restrictions on the number of days you can remain outside the United States.

As a U.S. citizen, you can petition for a number of your relatives to immigrate. Your spouse, unmarried children under age 21, and parents will be considered immediate relatives, and eligible to immigrate just as soon as you can get through all the paperwork and interviews. Your married children and children over age 21, as well as your brothers and sisters, are considered preference relatives, and can be put on a waiting list to immigrate. (This may take several years, especially for the siblings.)

U.S. citizens cannot be deported from the United States – unless, that is, they committed fraud in order to obtain their green card or citizenship.