The Non-Academic Staff Union,  NASU to Call Off Strike on Wednesday (Pix).

Federal Government has agreed to source for about N8 billion to settle the Earned Allowance of striking non teaching staff of Nigerian Universities within the next five weeks.

The workers have therefore been asked to suspend their ongoing industrial action by Wednesday, March 14 to allow full activities to return to the campuses. 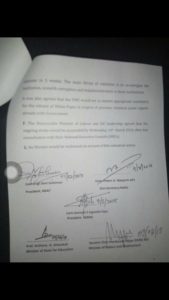 This decision formed part of the agreement reached between the striking workers under the Joint Action Committee and the federal government after two days of conciliatory meeting which also agreed that no worker will be victimized on account of taking part in the strike action.

The agreement was signed by the Minister of Labour and Employment, Senator Chris Ngige, Minister of State for Education, Prof. Anthony Anwukah, President of the Senior Staff Association of Nigeria Universities (SSANU), Comrade Samson Ugokwe, President of the National Association Academic Technologists (NAAT), Com. Sani Suleiman and General Secretary of Non Academic Staff Union (NASU), Com. Peters Adeyemi.
The workers had gone on a total and indefinite strike action on December 4, 2017 as a result of failure of the Federal Government (FG) to implement some of the contents of the Agreement of 20th September, 2017 between the Federal Government and JAC.

The agreement, copy of which was made available to The Nation indicate that the government and the unions agreed that: “Government is to source for eight billion naira within five (5) weeks to pay JAC of SSANU, NAAT and NASU members and members of the Academic Staff Union of Universities (ASUU) in the University of Nigeria, Nsukka (UNN) and University of Ilorin (UNILORIN), who did not get paid in the last disbursement exercise.

“The Federal Ministry of Education reported that the Office of the Accountant General of the Federation (OAGF) has started payment of Salary Short falls and the process is still ongoing. The FME is to synergize with the concerned institutions to ensure compliance with Presidential Initiative on Continuous Audit (PICA) requirements to facilitate payments of JAC members in the Universities that are yet to comply.

“The National Salaries Incomes and Wages Commission (NSIWC) is to rework the 15th December 2017 Call Circular taking into consideration the observations of JAC of NAAT, NASU and SSANU with a view to ensuring that it complies with the National Industrial Court (NIC) judgment.

“The Federal Ministry of Education has made submissions to the Office of the Head of the Civil Service of the Federation (OHCSF) for onward transmission to the National Council on Establishment (NCE) meeting, slated for 18th March, 2018, in Owerri and is expected to report the outcome in 5 weeks.

“The Federal Ministry of Education had put forward an application for the visitation panel to the Presidency and is to follow-up and report outcome in 5 weeks. The main thrust of visitation is to re-energize the Institution, unearth corruption and maladministration in these Institutions.
It was also agreed that the Federal Ministry of Education would set in motion appropriate machinery for the release of White Paper in respect of previous visitation panel reports already with Government.

“The Honourable Minister of Labour and JAC leadership agreed that the ongoing strike would be suspended by Wednesday 14th March 2018, after due consultation with their National Executive Councils (NECs). No Worker would be victimized on account of this industrial action.”