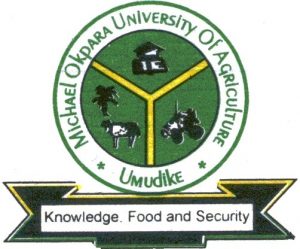 Applicants seeking admission into First Year of any degree course in the University must be qualified for admission before the beginning of the session in which they wish to enter. The applicants must meet the following:

Intending Students of the University are advised to go through the Admission requirements to ensure that they had satisfied the requirements before they apply for Admission.

Applications for courses leading to first degrees must be made on the prescribed website.

The minimum age for admission is 16 years. Students are admitted into the University degree programmes through a competitive entrance examination (Unified Tertiary Matriculation Examination -UTME) organized by the Joint Admissions and Matriculation Board (JAMB). A candidate must in addition have an acceptable score in the Joint Admissions and Matriculation Examination or a Diploma, NCE with at least lower credit. The candidate should at least possess a minimum of 5 credit passes at the SSCE or equivalent obtained at not more than 2 sittings in relevant subjects including English and Mathematics.

The B. Agriculture programme, requires five credit passes in SSCE/WASC/GCE ‘O’ Level which must include Chemistry, Biology/ Agricultural Science, Mathematics, Physics and English Language.  However, every applicant must have attempted Physics and Mathematics at WASC/SSCE/GCE O’ Level.  The exact requirements of different programmes which may be modified from time to time by the university Senate could be obtained from the University Registry as well as JAMB’s information publications for potential students.

TRANSFER CANDIDATES: Candidates who wish to transfer from other universities into the Michael Okpara University of Agriculture, Umudike, are required to:

i.)      Purchase and complete the prescribed application form obtainable from the University Registry at Umudike.

ii.)     Posses the minimum entry requirements for admission into the university as well as the special requirements of the proposed Department/ programme.

iii.)    Ensure that their academic transcripts and special reports on them (forwarded by appropriate officials of their former institutions) are received in the admission office of the University.

PROBATION AND WITHDRAWALS: Any student whose Cumulative Grade Point Average (C.G.P.A.) is below 1.00 at the end of any academic year is placed on probation for one academic year during which he/she is expected to repeat and pass the failed courses. If at the end of a period of probation, the student still fails to make the required C.G.P.A. of 1.00, he/she will be required to withdraw from the University for one academic year after which he/she may apply for readmission. Readmission in this case is not automatic.

DIRECT ENTRY: Admission is based on a combination of ‘O’ Level results with the following qualifications:

PRE-DEGREE: Candidates applying for the pre-degree programmes should possess at least five ‘O’ Level credits, in relevant subjects including English and Mathematics.

POSTGRADUATE PROGRAMMES: Candidates should possess the requisite qualification for their intended course of study at the time of submitting their completed application forms.

MASTER’S DEGREE:Applicants must be graduates of MOUAU or other recognized Universities who have obtained the approved Bachelor degree with at least second class Honours or its equivalent, or candidates who possess Third class Honours degree of recognized universities and at least an Upper Credit in Postgraduate Diploma in a relevant field, or Candidates who possess the Higher National Diploma (HND) with at least a credit from recognized institutions, plus credit at the Postgraduate Diploma in a relevant field from a recognized institution or any other certificate or qualification that may be acceptable to Senate.

DOCTOR OF PHILOSOPHY DEGREE:  Candidates must be graduates of MOUAU or other recognized Universities who have obtained a first class at the Bachelor’s degree, or a Master’s Degree in relevant disciplines with a Cumulative GPA of at least 3.5 on a 5 point scale, or at least 2.8 on a 4 point scale.

WAAW Foundation Scholarship 2022 | How to Apply