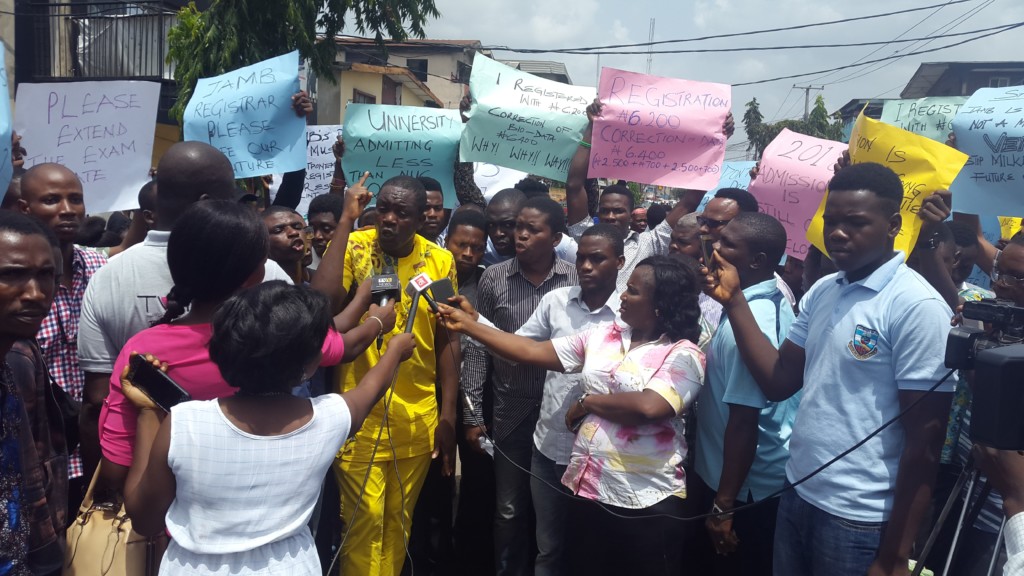 Ahead of the Unified Tertiary Matriculation Examination (UTME) exercise, scores of candidates, who registered for the exam, staged a protest in Lagos over what they described as the inconsiderate stance of the Joint Admissions and Matriculation Board (JAMB) by fixing the examination for March.

The protesting candidates were led by the National President of the Association of Tutorial School Operators, Mr. Dotun Sodunke.  Many of them were seen carrying placards, which bore various inscriptions such as; “Admissions are yet to close, why conducting another UTME now?”; “JAMB isn’t for revenue generation, stop milking our parents,” “2017 UTME held in May, why March in 2018?”, “2018 admissions not transparent”.

Addressing the press during the protest, Sodunke warned that Nigerians might witness mass failure; if JAMB went on to hold the examination as scheduled.

Arguing that the board’s decision to fix the date of the examination for March was not in the best interest of the candidates, he said the latter needed enough time to complete the UTME syllabus before sitting the examination.

Wondering if revenue generation for the Federal Government was more important to the examination body than the education of the candidates and by implication, the future of Nigeria, Sodunke said, “The new head of JAMB needs to be called to order. He should not be carried away by the euphoria of revenue generation. The future of this country depends on these children. ‘Admissions have not been concluded in many schools, yet JAMB has fixed a date for another one. Where is such a thing done?”

He also described the introduction of the Central Admission Processing System as a “fraud”, saying it was wrong to admit candidates on JAMB’s portal only to deny them admission later on the CAPS page.

“Everything is done in secret. We don’t even know which schools are organising the post-UTME and which ones are not. Every institution is doing what it wants to do.  This thing must not be allowed to continue in this way,” he said.

However, the Head of the Press and Public Relations Unit of JAMB, Dr. Fabian Benjamin, explained that there was yet no basis for the postponement being sought by the candidates, saying the date had been fixed as early as December, 2017, and that it was made public.

Benjamin said; “We need to place the interest of this country above selfish interest. The candidates are not the ones staging protest but the tutorial centres operators, and parents must intervene to rein them in. They are doing this because they want to keep the candidates at their centres till May so that they can get more money from them. Things are not done that way.

“JAMB is not alone in this business. All stakeholders in Nigeria’s education sector have realised that our calendar must be organised and firm as we experience abroad, and it must start somewhere.

“Even if heaven will fall, the new government wants to ensure that academic calendar starts every August, and that is why all admissions will be concluded by August this year. So if these candidates are affected, we apologise to them, it is for their good and the good of the nation.”